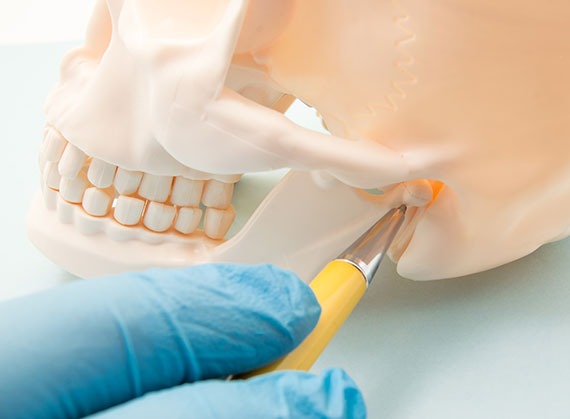 Gnathology is the branch of dentistry that studies and treats the masticatory apparatus in all aspects of anatomy and function.

There is a close correlation between the correct contact between the two dental arches, the mandibular muscles and the cranio-mandibular bones, gnathology deals precisely with studying and restoring the correct balance between these districts by solving the resulting symptomatology.

Teeth grinding in sleep: how to find out

Very often the sufferer does not know it, at least until he is forced to look for the causes of one or more annoying symptoms that last over time. The most frequent of which is a morning awakening with widespread sensation of pain in the jaws. It can be accompanied by the enlargement of the lymph nodes in the neck, the onset of headaches or migraines during the day, sudden pangs in the temples, tension in the neck, poor digestion and halitosis. Symptoms referable to pathologies that are also very different from one another, but that can be traced, if the specific case is a careful medical-dental analysis, to a phenomenon called bruxism: a widespread disorder characterized by the fact that during night sleep they are digressed teeth or the jaws are tightened for a prolonged time, both in a state of sleep and waking.

The dental examination is decisive: in fact it signals an excessive wear of the teeth (above all the molars and premolars, whose cusps appear worn out) compared to age and due to an improper use of the dental arches, and also a weakening of the teeth themselves, which they become a little mobile and sometimes move away from their home. But although the “bruxist” tends to underestimate the problem, in reality this must be taken into serious consideration, not only to avoid dental problems but because the causes are psychological and concern the whole quality of life. Bruxism expresses, in a form totally involuntary, a strong state of emotional tension that the person holds.

From a psychosomatic point of view, teeth grinding is an unconscious attempt to discharge a surplus of psychic tension, a share of anxiety or stress that has accumulated during the day and that the subject tends not to express. Emotions are denied and silenced during the day and then reappeared in a more controlled and less dangerous context: sleep.

Choose the right specialist. The ideal is a gnathologist, a dentist who specializes in chewing problems who will perform one of the following therapies :

You can find out more about which cookies we are using or switch them off in settings.

This website uses cookies so that we can provide you with the best user experience possible. Cookie information is stored in your browser and performs functions such as recognising you when you return to our website and helping our team to understand which sections of the website you find most interesting and useful.

Strictly Necessary Cookie should be enabled at all times so that we can save your preferences for cookie settings.

If you disable this cookie, we will not be able to save your preferences. This means that every time you visit this website you will need to enable or disable cookies again.

This website uses Google Analytics to collect anonymous information such as the number of visitors to the site, and the most popular pages.

Please enable Strictly Necessary Cookies first so that we can save your preferences!